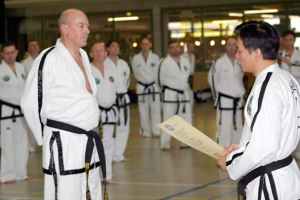 With this article I want to reach all ITF practitioners having hip problems, helping them continuing practicing Taekwon-Do.

In 1997 due to a motorcycle accident I had an hip injury. I was 5° degree at that time.
A vain in the hip was touched and this caused “avascular necrosis” : because the blood did no longer reach the bone, it started to mortify. Walking and practicing Taekwon-Do became painful.

In 2001 it became very difficult for me to walk, even 100 meters was too long.
The “classical” doctors were giving me some painkillers, saying : “ wait until you’re 60 and then we will perform an operation, giving you a classical hip replacement. Just rest and stop practicing sports.”

As Taekwon-Do was my whole life I made some research on the internet about new systems. I found a system called “BHR” or “Birmingham resurfacing hip”. Finding a surgeon with the necessary skills was the next step, as the system was very new at the time.
I found an orthopedic surgeon (Dr. Govaers in Dendermonde – Belgium), who had the skills and who wanted to learn more about the system.

Meantime I met a lot of people with similar hip problems.
Master James Tjin-a-Ton from the Netherlands has the same hip replacement. In Belgium we have 2 black belts (instructors) having a BHR, without facing any problems. Master Sutherland from Scotland told me in Scotland a person with 2(!) of these replacements is very active again in TKD.

The cause of the hip replacement can be osteoarthritis, inflammatory arthritis, avascular necrosis and hip dysplasia.

The BIRMINGHAM HIP was introduced in 1997 and has been unchanged since that time. All the other metal-on-metal resurfacings available worldwide today were introduced after the BIRMINGHAM HIP and are based in part on the BIRMINGHAM HIP design.
Resurfacing surgery spares bone instead of replacing it and it’s giving back your active lifestyle.
Whether your passion is sports, work or family activities, arthritis hip pain shouldn’t stop you.  For thousands of younger, active patients with hip pain, the BHR hip has restored them to their active lives while allowing them to keep more of their original bone.

Other athletes having a BHR :
Floyd Landis “After winning the 2006 Tour de France, Floyd finally got relieved from his severe hip pain with the BHR Hip”
Cory Foulk “An endurance triathlete, Cory didn’t want to give in to his severe hip pain and give up his 30-year competitive lifestyle. He found out he didn’t have to. »
Peter Webb “The pain relief and return to activity that BHR Hips provided inspired Peter to train for and complete the 2005 London Marathon. «
Steve Beuerlein “Former NFL Quarterback, Steve Beuerlein has his life back thanks to the BIRMINGHAM HIP Resurfacing.”
Bob Arnot “Dr. Bob Arnot is back riding bikes and enjoying life since he opted to have both hips resurfaced.”
Scott Tinley “Two-time Ironman World Champion Scott Tinley is back surfing thanks to the pain relief provided by BHR.”

In the beginning the BHR was known as “a time buying system”.
Today my surgeon Dr. Govaers showed me some statistics ….. It is not impossible having a BHR for a lifetime .

Feel free to contact me if you have any questions,

TAEKWON-DO AND IMPACT ON THE HIPS

* Pictures
* First article on ITF website (and in Taekwon-Do Generation)

As GrandMaster Pablo Traijtenberg quoted during the ITF Convention 2017 in Benidorm (Spain), there are many hip injuries amongst Taekwon-Do practitioners all over the world, so I decided to write a thesis about this phenomenon and the possible solutions after research.
Already after my Master grading in 2004 I decided to write an article for the ITF website about my ‘resurfacing hip surgery’ and the result.
After my article was published on the ITF website and in Taekwon-Do Generation, I was contacted by persons from around the world about the Birmingham ‘resurfacing hip’ BHR. Previously I didn’t know that so many Taekwon-Do practitioners suffer from hip injuries because of various reasons.

After this surgery I could continue practising my beloved martial art Taekwon-Do and could have back my quality of life and an active lifestyle.

Stretching with a BHR
Meanwhile during my contacts with others it became clear to me that there are different hip injuries, due to various causes, not only related to Taekwon-Do.

I’m grateful to all Sabums and Sahyuns sending me their experience. It was very interesting as I discovered a new world during my research .

The difference between practicing Taekwon-Do 40-50 years ago and nowadays is very different.

The ‘hard’ Korean methods are replaced by a more responsible-scientific medical justified workout. Some karate inspired methods disappeared in time with e.g. higher stances and the sine wave. When reading this document it will be clear this is a very positive evolution.

It is my opinion that during the time, new instructors are evolving in this matter .

Fast but not hard kicks are important, the right angle, feeling comfortable in every movement and stance is the message I want to give through this work.

I hope with this thesis that in the future hip problems due to Taekwon-Do will be over.
I quote also :

“To the best of my knowledge, nobody keeps statistics on how many martial artists get their hips replaced, but the list of veterans who’ve had the surgery done on one or both sides is impressive. Jean Claude Van Damme, Chuck Norris, Bill Wallace, Billy Blanks, Keith Hirabayashi Cooke, Christine Bannon-Rodrigues, Steve ‘Nasty’ Anderson, Larry Carnahan, Danny Dring, Tom Seabourne and Joe Hess are just the tip of the iceberg.”

The old school? I invite you to read this document. I will always be ready to share my experience.

My first hip problems started in 2007 when I was training for the Worlds in Canada.
I was having groin pain and the flexibility.

I returned and met with my surgeon who thankfully was a sports surgeon with a lot of experience.

I had tears, a bone growth and the left hip was a mess. He said that I would need a new hip soon but to keep it as long as possible.
The first operation cleared the hip out to try to save it for more years.

The original problem in the left was as a teenager my growth plate in the main femur was growing tilted by 2mm, thus putting the femur head out of line. He said that this problem would always resulted in a full hip replacement but with the TKD training I did had brought it forward maybe 20 years.

As you know we all trained very hard and I think the impact repeated over and over and the hard training surfaces gives no cushioning for the joins then breaking down the fluid and cartilage too fast.
Forcing hard stretching without good warm up/preparation.

I continued to compete and pushing too hard on an already weak joint, resulting in cracking the femur head and it was ready to collapse, so immediate surgery. Which was a huge shock as I was relatively young and was not ready to retire.

The 2nd hip problem started from an injury teaching at the Norwegian summer camp where I was demonstrating and someone kicked under my hip when I was not ready and I felt the bone hit from the socket. I left it too long before seeing my surgeon, resulting on 6 weeks crutches to relieve the pressure in the joint, then one surgery to drill holes in the socket and femur head. 6 weeks again on crutches, that did not work so I had to have the right hip fully replaced November 2015

Now I rethink training for myself and my students.

Do you not think that it is strange that I know of very few women who have had hip replacements let alone 2 in TKD.

I hope this helps and if you wish to ask any questions please feel free.

Agree sir. I believe Static stretching at the beginning of the class, then expecting the body to perform at a very high and fast level is definitely a contributing factor. As well as hard surfaces for training on like concrete floors……. I would also like to add that we never used to cool the body down at the end of the sessions. We would just walk home after training, no stretching or relaxing time. I also think the forced stretching we did with people pulling our legs apart was unnatural for our bodies and I had this done to me on various occasions in a bad way. I do believe that there is a good way of doing this through PNF stretching where the students relaxes the muscles as they are being stretched by someone else then they add resistance for about 10 seconds then relax and the leg will naturally stretch. However without it being forced. In particular my situation came about due to these kind of exercises over many years, but also after an operation on my meniscus where I stupidly went back to classes the day after my operation as I felt fine. I was on crutches and actually I should have had at least two weeks of total rest. This made a massive impact on my hip as I started to walk differently as my body compensated for the pain in my knee and therefore I wore away my cartilage. I hope that helps. I plan to write a complete report on my rehabilitation from the blog that I wrote whilst in recovery. This work is very important that you are doing as many more TKD people will need these operations. Kind regards …

I believe it would also be helpful to add in the cost of the procedures, I would also add that there are some countries that will now only do the THR because of some blood poisoning from the resurfacing. I believe Master X could not get any insurance for the resurfacing which is why he had to go with THR. I chose THR as no one in the south of England does the resurfacing any more and when I enquired in Birmingham from the founder it was in excess of £18,000. Whereas I got the THR for free on our National Health Service. I am also back kicking and performing patterns as before. I even did Moon moo the other day. I am able to kick head height again like I did back in 2014 and that was a massive relief.

Dear Master Frank, thank you for your message, this topic is very interesting for all Taekwon-Do practitioners regardless whether they have or haven’t had any symptoms of hip injury. My problem started around 2007 but I didn’t get a proper diagnosis by an orthopaedic surgeon until 2009, and that’s when I decided to have a hip resurfacing. Then in 2013 I started with similar complaints on the other hip and I knew straight away that it was the same affliction, so I went the same way and now I have both hips resurfaced. I can say that my recovery has been fantastic in terms of flexibility and power. I think the fact that I started training Taekwon-Do in 1973 when I was 13 (Moo-Duk Kwan in Mexico City) is one of the reasons why later in life I developed the condition (severe warm-ups and routines as you point out). Funnily enough I wrote my thesis for VII Degree on this subject: ‘TAEKWON-DO AND ITS IMPACT ON THE HIPS – A PARTICIPANTS JOURNEY’ and I try to use my experience to guide my students in a way that hopefully will avoid the need of surgery altogether in later life. I include my thesis as I did a lot of research into hip degeneration in Taekwon-Do and I hope it helps someone out there.

Reading your thesis I see I wouldn’t bring anything new to your work. It is very broad and comprehensive. Informative and in my opinion useful to everyone who may face the problems we had.